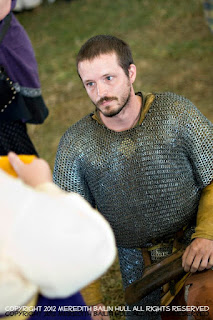 In a short matter of days, I will once again be called up to take the tabard of a champion. I find it fitting that it will once again come from the hands of Her Majesty Avelina, a woman who has inspired me as a Queen, a Peer, and simply as a wonderful person. It is an honor and a privilege for me to serve her in this capacity again.

It is hard to explain what it is to be called as an unbelted champion in the East, especially to people outside the fighter culture of the Kingdom. It is an honor and a responsibility. You will have to fight The Fight… yes, that should be capitalized… in front of a crowd composed of both of the primary Kingdoms, as well as the rest of the Known World who have come out to watch.
To some (myself included), I have yet to fight The Fight. The one year I fielded as part of the team, it was not against our annual enemy, the Midrealm, but alongside them, fighting the allies of the Known World. That… was a different fight. It was intense and fast and brutal… but it wasn’t The Fight. In that, I have yet to be tested.
There will be those who criticize The Fight as brutal spectacle, even in a sport based on physical violence. They say the calibration is higher, that more people will shrug shots because there is seemingly more at stake. Maybe they’re right. I’d like to think that they are not. We are plainly told in preparing for the fight to strike with speed and ferocity, and to throw blows that will not be questioned as light. We are also told to accept blows, and to not bring shame to our brothers by being questioned.

Someone, one year, described us as “the monsters they keep in the closet, to be let out when needed”. I found that apt. We are all, every one of us, killers. That’s what we bring to the table in this Fight… the ability (and desire) to bring overwhelming violence at point of contact, and a deep seated love of the melee. We oftentimes do not seem to fit in with polite company… we’re the rough and tumble ones who are too loud and coarse. Some of us learn to refine that. Some do not.

There are those who call the team a product of politics and posturing… that only those who are connected and kiss the right asses, only those who are connected with the right Houses and the right knights will get on. It is sometimes true that politics take a hand, I cannot deny. Knights will lobby for their squires, and that may be rightly so. Their squires are their charges, and helping them seek avenues for recognition is part of that job. Have there been times that affected the makeup of the team? Sure. Is it required to be connected? Is it all a political game? No. There are enough of us who are not connected to show that.

For me, it’s humbling. The unbelts were always something a bit larger than life for me. I loved going to Northern Region and fighting against them… the rabble against the (to me) best of the best. It was like setting up against the varsity squad… they might be a bit better, but here was your chance to show them what you had, make them take notice of you so maybe next year you’d have a better shot. Seeing them in their tabards at War, hearing the stories of The Fight… all part of the legend.

I knew that making the team generally required making a lot of commitments for travel, having to hit certain events, to be seen by certain people. I steadfastly refused, for the most part. I felt that if I was worthy, I was worthy, and that was that. I get now that there was more to it than that… seeing how you work together as a team is a big part of it, not just as an individual fighter. The team is not a company of heroes. The opposite, really… there shouldn’t be heroes. There should be those ready to make sacrifices for the team, for The Fight. You may not be the one to get the kills… your job may be to refuse a flank, to kite off some fighters to break up their advance, or to protect the polearms as they do the killing. It. Is. A. Team.

We will all be stepping on that field to fight The Fight not just for ourselves, but for the East. When we strike, it will be with the fury of every Eastern blade. This is what our enemies, our brothers in red and white deserve and expect, and what they will also be bringing to the field. The. Fight.