Opening of the Inne at Coldwood 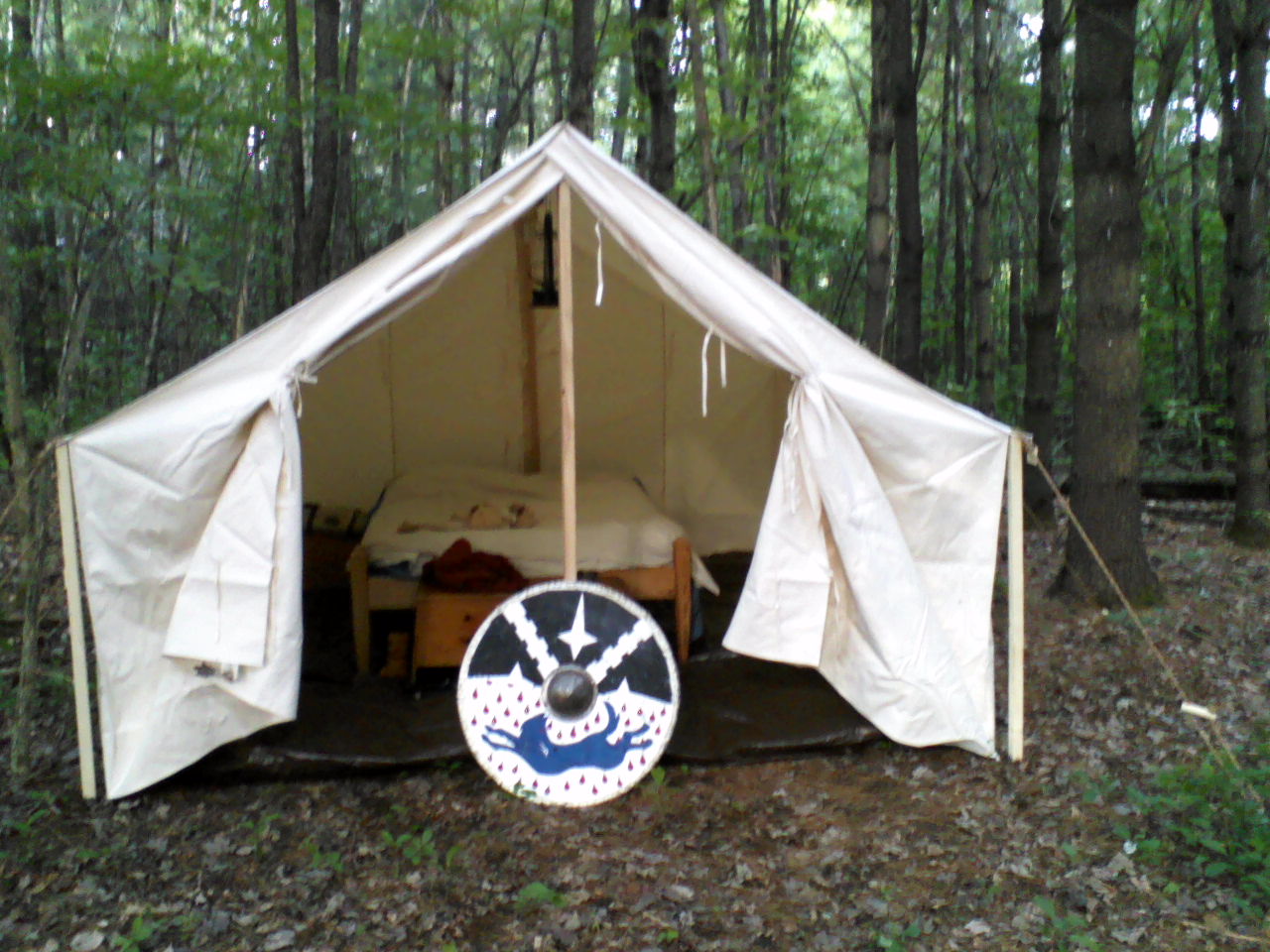 This weekend was the 25th opening of the Inne at Coldwood. It was, as usual, a blast.
I went up on Firday night, which was a first for me. Usually we roll in on Saturday morning and stay overnight. This time Dalla had to work Saturday morning, and wouldn't arrive till just before feast, so I took Friday off and went up alone. Arnbjorn, Twiggy, and Chris Li arrived at the same time, and we got set up. It was my first event in the new tent (which is awesome) and the first using our Panther breakdown bed. Having the bed makes SUCH a difference... can't wait to use it for the two weeks of Pennsic. At first I was worried about how much space it took up... then Dalla pointed out... you can store things under it dummy!
Friday night was a very chill, laid back atmosphere. Sat in the Inne with Kit and a bunch of others and talked, drank mead, and generally relaxed and enjoyed myself. As dusk fell, the fire pit in front of the Inne was lit, and Many migrated out there. Had more mead, and a fine cigar with the Baroness. I told a couple stories, and actually performed a song by the campfire. After the song, I chatted with Maeve, telling her what was probably far than she ever wanted to hear about Norse mythology. :) Before I knew it, it was well after midnight, and I turned in. Remember what I said about the bed? SUCH a good night's sleep!
Saturday was the main day of the event. Fighting was going by mid-day, with a couple of tourneys, then we moved into the woods and fought there for the rest of the day. mainly woods melee fighting, but some pickups afterwards. Had some good fights, and worked with a couple of people on spear and axe stuff.
Feast was in the evening, and Dalla made it there with time to spare. I helped a little bit finishing the feast prep (not as much as some past years, and not NEARLY as much as the main fest folks... they bust ass!) and then helped serve feast. I like doing that.... feeding folks makes them smile alot. :) After the toasts at feast, Sir Stephen's squires joined together to wish him a happy fathers day with a very touching tribute. Sir Stephen holds a very dear place in my heart... he has been very helpful and supportive whenever I needed it, and basically acted, unasked, as a surrogate Peer when my own was not able to be there. He is one of the people who really represent what I envision as a Peer in the SCA.
After feast, before the partying got started, we added another member to House Wolfhaven. Erland (Emery Corbine, to those who know him outside the SCA) joined my House and my Hirð (hearth troop). He and Snorri and Arnbjorn all acquitted themselves very well during the day, and made me proud.
We got going fairly early Sunday morning.... there was a brisk breeze overnight, so the canvas was pretty much dry. We got just past Plattsburgh... and it started PISSING rain, and continued to do so for the next three hours. So glad we got out when we did.
All in all, great weekend, as Coldwood always is. Thank you to everyone who I chatted with, either sitting and chatting, or even in passing. Things have been hella stressful for me lately, and I really needed it. I returned to work thoroughly rejuvenated today. I want to especially thank Maeve, who was very tolerant of me being VERY wound up and verbose, and Dwarf, for a serious conversation on Saturday evening.
I realize some of you may have never visited the Inne at Coldwood. I will do a separate post about what it is... because that deserves its own post.

Posted by Unknown at 3:36 PM No comments: