My legs ached and my lungs burned as I pounded along the track. My maille was heavy, my shield was bumping against my back, axe swinging in one hand. Winterstead, my home, was ahead and I was going to be too late.
We had caught the raiding Svear before they could do any damage. A boy fishing had spotted them beating against the wind up the coast and raised the alarm, so we were ready for them. We came out of the woods as soon as their feet hit the shingle, and it was all over but the dying. They outnumbered us, but they were half armoured and unready, and we cut through them like a scythe through grass. Their chief was the last alive, making a stand in maille and crested helmet like the lord of war he was. My first axe stroke took the shield from his hand, my second opened his chest. He died coughing blood and scrabbling to pull the torn remnants of his maille from the cut. I did him the kindness of putting his sword in his hand, though the anger I felt at that moment was great. Gods curse these men… wasn’t it hard enough holding this land against the Saxons who wanted it back? Wolf should not prey on wolf…
We divided up the spoils, Magni taking a small crew to row the ship to the river where it could be run in till we could give it a going over and crew it. Then I realized the time that had passed… and realized the danger. I had to get back to Winterstead, before it was too late.
Sweat was pouring down my back now, despite the chill coming on as the sun sank. I itched in half a dozen spots I couldn’t hope to reach, and I daren’t stop to take my maille off. My men puffed along gamely, and their perseverance helped keep me going. There was the big yew at the edge of the meadow, and the hawthorn hedge. Not far now…
I saw the smoke as I crested the knoll, and knew I was cutting it close. But things looked peaceful, and I slowed as I entered the yard, chickens scattering and dogs running to meet us. The evening fires had been lit… but I was still in time!
My thralls were to me immediately, helping strip my armour and sluicing me down with water, cutting most of the gore and grime. I ducked through the door, and as my eyes adjusted, saw my wife duck out from our sleeping cupboard. She was radiant, cheeks smiling from beneath her simple hood, keys swinging at her belt.
“Quickly, husband”, she said. “You very nearly caused our doom…”
“ADADA!!! EEEEAHHDA!!!” my son added, perched on Dalla’s hip.
It was bedtime at Winterstead… and my little Bjarki, our sweet Winterborn child, was not going to go to sleep without his faðir wrapping him in his favorite blanket and rocking him to sleep.
Some things were too important to miss. 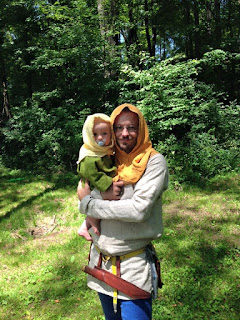