Uncle Olaf and the Pennsic Stone

It was brought to my attention that despite the way I blather away on Facebook, many of you had no idea about the stone I carved and placed at pennsic this year. So... a quick post to tell the (abbreviated) story.
A few years ago, I had a pipe dream about carving runestones, small ones, to leave around Pennsic.... specifically with the purpose of people taking them home with them. THis grew into the idea of "DUDE, IT WOULD BE SO COOL TO DO A PERMANENT ONE!!!"
I voiced this idea, somewhat wistfully, and lo and behold, a friend put me in contact with a member of the Cooper's staff to discuss it with. They were amenable to the idea, so long as it was out of the way, and wouldn't interfere with day to day operations. So... I sought a stone, and started plotting.
I found the stone I would use at the house of a friend... it was about a foot wide, around six feet long, and probably about 6 inches thick. It was... well, a bit big, frankly. It weighed somewhere between 500 and 600lbs, and I decided to split it into three manageable sections, lengthway. So one stone became three, each six feet by one foot, and around two inches thick. It was one of these stones we packed in the truck to Pennsic. 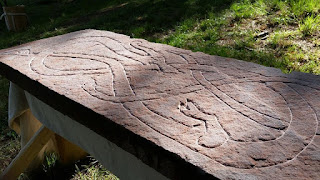 It made the trip well... 450 miles or so, without a hitch. Then, we took it off the truck and placed it on the ground... where the bottom 18" or so snapped off. Because of course it did.
There was still enough to make a respectable stone, so I made contact with the Coopers about placing it and started carving. It was done COMPLETELY at Pennsic... design, carving, painting. It's not a true "runestone"... in that there are no runes on it. It's simply a "rune-serpent", inspired by Urnes style beasties. I sketched it on freehand, then carved the design in with chisels. My protege Arnbjorn kept my chisels sharp, and my wife Dalla helped me with the last bit of carving, and on Friday of War Week, I got final approval for placement, just inside my camp, House Wolfhaven at the end of Nagashino Road. My campmate Justin helped me set it into concrete, and it was  finished. It waits to greet us there next year. 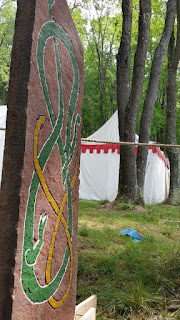 The Pennsic Runestone Project, spearheaded by Valdis of Gotland, has not yet come to fruition.... they have not been able to complete funding goals, and it has stalled. You should check out their site here: https://www.facebook.com/groups/53562510901/ and think about supporting the project.